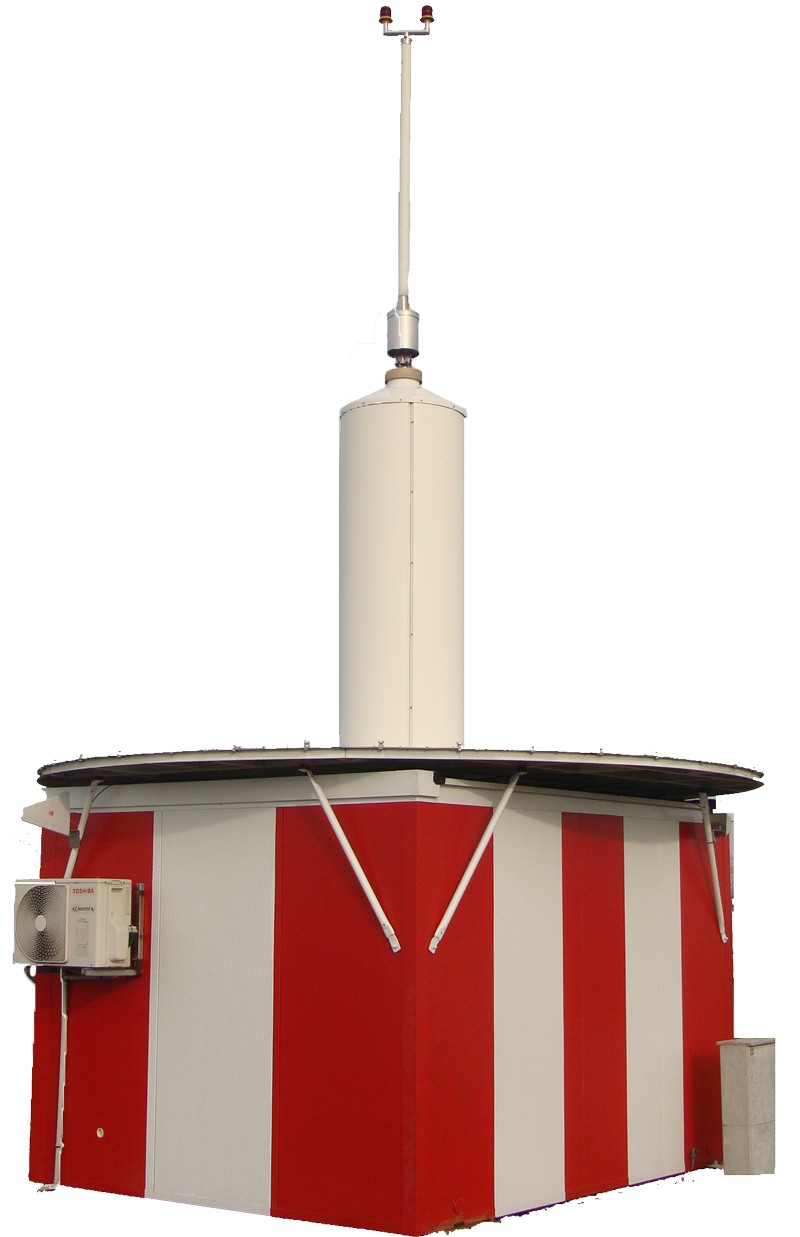 DME is used to secure navigation information in flight paths and TMAs. It is often used in cooperation with other radionavigation devices - most often as VOR/DME, ILS/DME and TACAN (VORTAC) or as a radionavigation point alone.

DME beacon network is due to its accuracy used for RNAV navigation, allowing aircraft (which are equipped with navigation systems that fulfill a given measurement accuracy) to fly on any track outside corridors.

It can also be used in cooperation with MLS landing systems where it is necessary to ensure the accuracy of DME/P in two phases - phase IA (initial approach) and FA (final approach) (see below).

The DME operates on frequencies from 962 to 1213 MHz with 252 channels, divided into 126 channels for X mode and 126 for Y mode (see above). The frequencies on which the DME works are divided to the frequency for interrogation (which are paired to response frequency).

For interrogation pulses from aircraft are used frequencies from the range 1025 to 1150 MHz (the on-board interrogator is set to VHF frequency paired with the UHF frequency of the ground beacon) and for the response pulses then the whole frequency range from 962 to 1213 MHz.

Frequencies of the interrogation and response pulses are always shifted up or down for 63 MHz. Whether the response shifts 63 MHz up or down depends on whether the DME is operating in X or Y mode (see Table). 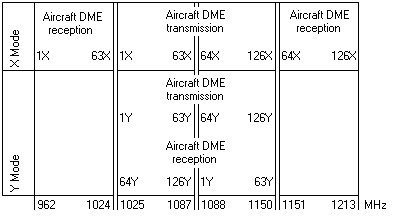 We have a DME ground beacon that works in Y mode at 1042 MHz. Calculate what frequency must be set on the aircraft and determine what channel it is.

The DME works with interrogations and responses principle when the interrogations are transmitted from an on-board interrogator and the ground radio responds. As it can be decoded from word "radionavigation", it is a device that operates on the principle of transmitting and receiving electromagnetic pulses. These impulses are in the case of DME in a pair and are called double-pulses. Double pulses have specific characteristics such as pulse width, length of leading and descending edges, amplitude, period between pulses and delay between interrogation and response. 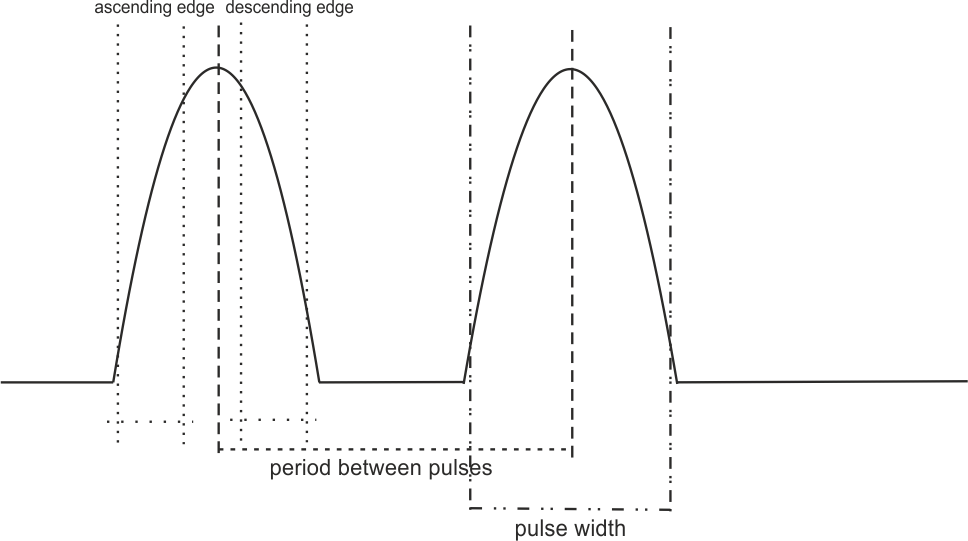 
The distance calculation is based on the measurement of the time between interrogation and respond from ground station according to:


Function principle in a nutshell

How do DME distinguish aircraft from each other? Jitter

The function principle described above definitely works for one aircraft, but how does the DME works when more than one airplane come into its range? How does it distinguish which interrogation belongs to which response when the interrogations and responses are in characteristics identical?

The solution is the so-called Jitter through which we can distinguish and correctly match interrogations and responses from more planes.

The airplane arriving in the DME workspace sends interrogations in the form of double-pulses with randomly selected frequency - the jitter, which is the same throughout the whole broadcast, waiting for the responses. The ground beacon is responding with the same jitter/frequency. On-board interrogator predicts when answers to his questions should come and "seeks" responses that have the same frequency as his original interrogations. 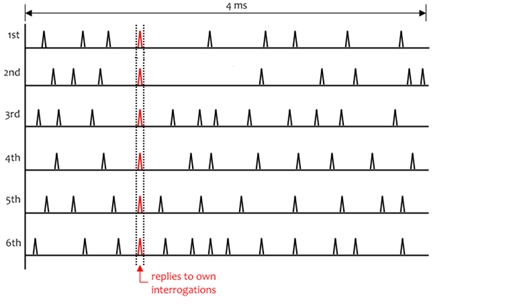 How many aircraft can DME actually serve?

Different sources give different numbers of aircraft that can be served by the DME. DME from Fernau Avionics is said that can serve up to 100 aircraft. DME from THALES is said to be capable of serving up to 200 aircraft. It will probably be related to how many responses the device can send per second.

According to ICAO recommendation ANNEX 10/1 3.5.4.1.5.5, ground equipment should be capable of serving 100 aircraft. Therefore, it should be able to send 2,700 ppps (the probability that each aircraft will receive enough responses for the distance calculation (on board)). This is based on this consideration:
If in DME range would be just aircraft in search mode, than DME would be able serve only about 18 aircraft. Aircraft number = ppps/search mode = 2700/150 = 18

If in DME range would be just aircraft in track mode, then DME device would be able to serve about 90 aircraft. Aircraft number = ppps/track mode = 2700/30 = 90

On average 54 aircraft can be served.

Fernau Avionics declares capability of up to 5000 ppps. If we use the same logic as described above, we will get an average of about 98 served aircraft. So, if THALES declares its ability to serve up to 200 aircraft, it must be able to transmit about 10000 ppps!

The total number of responses is constantly changing according to the number of interrogating aircraft (and the random noise that is also triggered by the transponder). In order to avoid quick changes in the number of transmitted responses (power), DME automatically drives and generates noise at the output of the receiver - Squitter. Squitter creates false interrogations to which DME responds.

For example, if there are 10 aircraft in the work area, DME creates its own "false" interrogations to ensure constant power. But when there are for example 90 aircraft, DME will suppress squitter and responds only to real interrogations.

If the DME approaches the nominal number of responses (> 90% of the DME load), DME automatically reduces sensitivity and those aircraft that are the most distant are not served. This ensures that the DME is not overloaded.

The description above is related to the use of DME/N in which only X and Y modes are used. However, if we use DME as a part of the MLS landing system, it is necessary to ensure the accuracy of the DME in P mode. The letter P indicates the "increased accuracy" of the measurement. The defined accuracy is divided, depending on the landing phase, at phase IA (initial approach) and FA (final approach/final). In addition to increased accuracy in distance measurement, emphasis is also placed on pulse quality and DME/P also works in different modes (X, Y, W, Z). Those modes have different periods between double-pulses and delays.


Frequency of DME/P and MLS 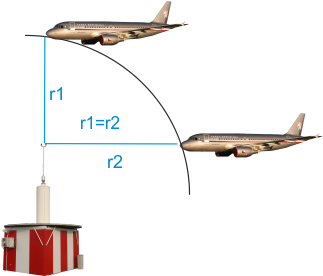 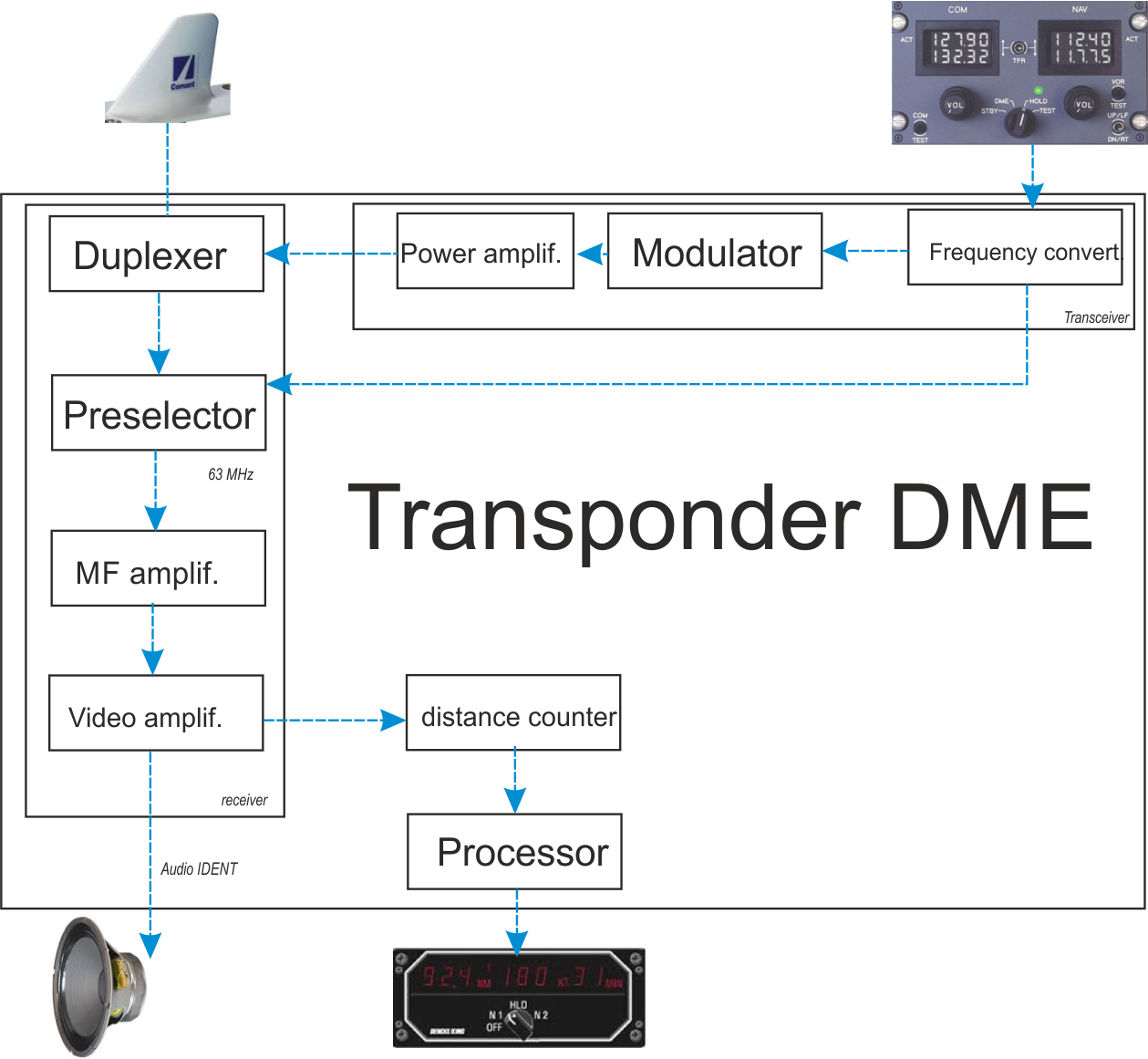